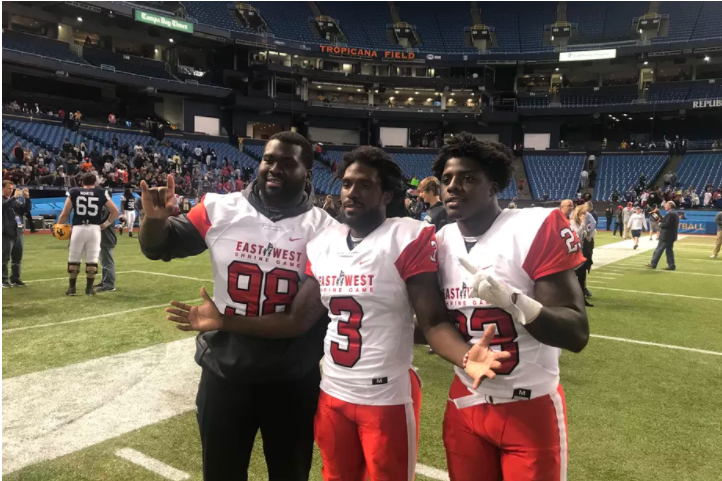 Texas Tech quarterback Nic Shimonek connected with University of Houston wide receiver Steven Dunbar in the end zone for a 34-yard game-winning touchdown with just 1:23 left in the fourth quarter to give the West team a 14-10 victory in the 93rd Annual East-West Shrine Game Saturday afternoon at Tropicana Field in front of an announced crowd of 21,700.

In all-star games, offensive line play and quarterback play are often spotty and the East-West Shrine Game was no exception. With just four days in install plays, both teams could not crack 300 yards of offense. The East team failed to convert on a single third down. They went 0-for-11 for the game.

Ohio State quarterback J.T Barrett got the start for the East team and struggled throughout the game. He was 5-13 for 69 yards and a touchdown, but was sacked and fumbled in the first quarter, and the West's Natrell Jamerson was there to scoop it up and score to give them an early 7-0 lead. The East team made a field goal in the second quarter to cut the lead to just 7-3 at halftime.

Barrett would give the East a 10-7 lead in the third quarter when he found Slippery Rock DE/FB Marcus Martin from four yards out for the touchdown, which looked like it would hold up until the heroics of Shimonek and Dunbar.

USF Football had four representatives in the East-West Shrine Game with quarterback Quinton Flowers, running back D'Ernest Johnson, defensive tackle Deadrin Senat and cornerback Deatrick Nichols, although just Johnson and Nichols played in the game. Johnson was the most effective running back during the entire game, rushing for 31 yards on six carries, with a long of 16. He also added one catch for 12 yards and 32 yards on kickoff and punt returns.

Flowers left practice earlier in the week when his grandmother died. Senat had a minor knee sprain and did not want to risk further injury after he had a stellar week of practice. NFL scouts were impressed by him and he shot up draft boards. One scout said, "He showed out this week, I was really looking forward to seeing him play."

Both Flowers and Senat will get another chance to showcase their abilities at the NFL Combine next month in Indianapolis prior to the NFL Draft.

Want to find more Things to Do in St Petersburg & Clearwater? How about the best resource for Events, Restaurants and more! Stay connected to all things St. Pete by registering above. Your subscription is free!