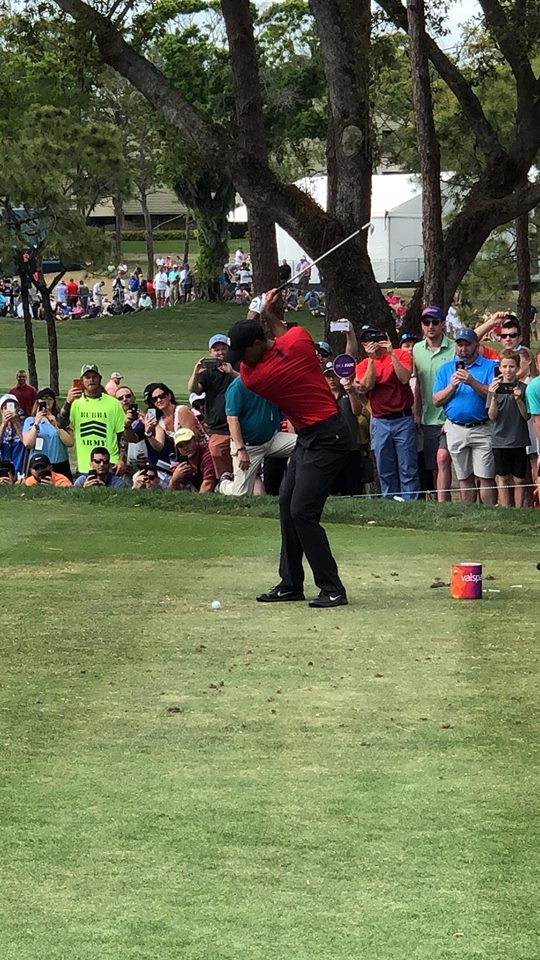 It was 1:30 Tuesday afternoon, and Tiger Woods had just shown up on the far right end of the Copperhead driving range at Palm Harbor's Innisbrook. Several hundred (or was it several thousand?) fans followed as closely as they could. They hung on his every warm-up shot and strained to hear what he was chatting about with Jim Furyk, his caddy Fluff Cowan, and Steve Stricker on the range. Remember it was a Tuesday afternoon, and not all of those fans were retirees.

And on the far left end of the range was Jordan Speith... all alone. That Jordan Speith, Valspar’s favorite son, who burst onto the scene in 2015 when he won the tournament in a playoff, and then the Masters and US Open later that year. The owner of 11 PGA Tour wins before the age of 25, now left all alone because of Tigermania.

But that's the way it was at the 2018 Valspar Championship. Tiger Woods committed to playing in the tournament just hours before the deadline, and the Valspar would never be the same.

Ticket sales soared. Security plans ramped up to super-VIP levels. Last-minute orders for more Porta-Johns had to be placed. Woods had to hire someone locally as his personal chef for the week and find a place to stay. I would've offered our guest bedroom, but I think he wanted something a bit larger.

Tiger didn’t win, finishing in a tie for second place, one stroke back of the winner Paul Casey. Oh, that’s right, Paul Casey won... sort of got ignored by the Tiger frenzy.

Tiger even made it dramatic. He dropped a 44-foot bomb for birdie on 17 that drew him to within one of the lead and ignited a roar that could be heard all the way to PGA Headquarters. But the rally ended on 18 when another 44-foot bomb refused to reach the hole.

To those who thought Tiger Woods was finished, he's clearly not because he proved to the golfing world that he is finally healthy again after four years of battling injuries. Woods confirmed his comeback before the largest, loudest, and most enthusiastic crowd in Tampa Bay golf history. The official attendance figures haven't been released yet, but it was clearly one of the biggest crowds in the 18-year history of PGA Tour golf in the area. 150,000 fans? Possibly.

That estimate isn't including the number of viewers from home, which was record-breaking. NBC's weekend coverage of the third and final rounds of the Valspar drew the largest TV numbers among non-majors in five years... since Tiger Woods won The Players Championship in 2013. Sunday’s final round drew the largest audience since the 2015 PGA Championship, and Sunday’s round outdrew last year’s Valspar Sunday round by 190%!

All because of one man, and his choice to play in Tampa Bay.

And the work of the Valspar Championship crew led by tournament director Tracy West, and the membership of Copperhead who have been staging professional golf in the Bay Area for 40 years, and the work of the Innisbrook staff led by managing director Mike Williams... and the gentle coaxing of Innisbrook owner Sheila Johnson, who has been whispering in Woods' ear for several years.

The players seemed to love playing the Copperhead as well as the galleries. Tiger Woods said, “They are fantastic, just great. They’re really into it.”

Columnist Steve Hummer of the Atlanta Journal-Constitution put the Tampa Bay golf fans’ enthusiasm best: “Generally, you only see crowds that raucous if France is being liberated from the Nazis.”

Now what does the Valspar do for an encore?

For more sports news, register on 727area and connect to everything going on in the St. Petersburg-Clearwater area.