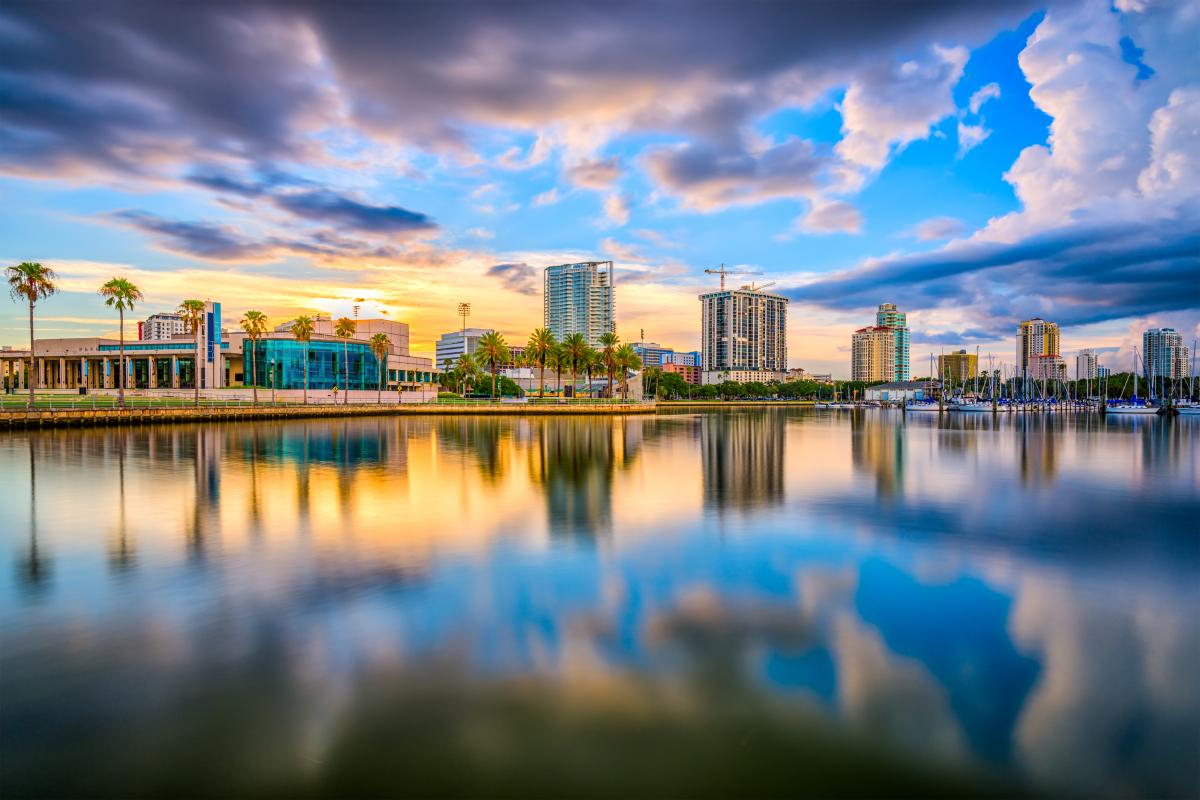 St. Petersburg, and more specifically Downtown St. Petersburg, was founded in 1875 when General John Williams came down to The Bay from Detroit and bought the 2,500 acres of land that the city was built on. He wanted to build a beautiful waterfront city with graceful parks and broad streets. But his first investment was the city’s first hotel, named after William's Birthplace of Detroit. Thirteen years down the road, Peter Demens, a noble Russian aristocrat, brought the Orange Belt Railway to St. Petersburg. One rail at a time they built up the railroad to St. Petersburg and in 1888 the first train rolled up in Downtown St. Pete. After the railroads' vast success, Demens named the city after his birthplace, St. Petersburg, Russia.

Downtown St. Petersberg has had a great effect on Florida’s biggest traditions and industries. In 1914 Al Lang, the then-mayor of DTSP convinced Branch Rickey to bring the St. Louis Browns to DTSP for spring training making them the first team to do their spring training in Florida. The same year, Tony Jannus flew his airplane across The Bay which is considered the first commercial flight. A year later, the first library opened and it still remains in operation today.

In Downtown St. Pete there’s only one restaurant group that makes delicious authentic Mexican cuisine with a Latin touch and that’s the Red Mesa team and brand. They have three different locations in DTSP, the Red Mesa Restaurant, Red Mesa Cantina, and Red Mesa Mercado. Each has a different flare but they all emphasize the importance of unique flavors and atmospheres that are inviting and welcoming to all guests. Red Mesa Restaurant has one of the largest tequila collections in Florida so if you’re looking for the Bay’s best margarita, Red Mesa Restaurant and Cantina should be on your list. The Mercado is more of an urban drive-by dining style unique to the streets of Southern California. Stop by for the freshest ingredients and secret recipes, rich with flavors!

The Mill was recently voted by Florida Trend Magazine as the Best New Restaurant in Florida! Their goal is to provide a top-notch dining experience and the best service in town while feeding you unique flavors in their hearty entrees and delectable desserts. Some of The Mill’s best dishes are The Watermelon Bruschetta, Apple Cider Braised Pork Belly and their handcrafted Charcuterie boards.

The original Bodega opened in DTSP when the founders Debbie and George Sayegh were hungry for something different. They wanted to create a restaurant for themselves, so they opened Bodega, the Latin style eatery that filled a void that DTSP did not have at the time. Debbie and George are still in awe of Bodega’s loyal following and the local support they’ve received over the years. But most of all, they are incredibly thankful to all of their guests, especially those who visit every week and tell their friends, family and out-of-town guests to stop by. Stop by today and try their Frita, Cuban or Maduros for a whole new flavor profile in your life.

Our 5 Favorite Nightlife Destinations in DTSP

Looking for a bar with guaranteed fun and games? Well, look no farther than Park & Rec in Downtown St. Pete. This adult playground is stocked full of nostalgic arcade games like Pac Man, NBA Jam, Skeeball, pinball, air hockey, & more. You can also sign up to compete in giant beer pong, cornhole, giant Jenga, billiards & giant Connect 4. Once you work up an appetite, grab a snack, handheld bite or pizza to full your tummy with energy for more fun and games. Quench your thirst with tallboys and specialty cocktails to keep the fun going all night long.

If you’re going out with your friends for a bougie night in Downtown there’s nowhere better to be than Canopy at The Birchwood. Put on a cute dress, some comfortable heels and maybe even a bowtie before heading to this rooftop hotspot. If you’re a bougie girl living in a bougie world then we all know you’ll expect an Instagram to be taken on your night out. Luckily, Canopy has the most gorgeous waterfront rooftop with views of the Bay for your next record-breaking Instagram.

Mandarin Hide is an upscale and bustling trendy music lounge and bar in the heart of Downtown St. Petersburg. Treat yourself to their intriguing atmosphere and enjoy one of their signature cocktails in front of some great live music. Stop by the bar while they’re mixing old-school & specialty cocktails in a dimly lit, retro-style interior.

Modern fare with global twists served in a Victorian-accented, loungey space with long marble bar. Right across the street from the Fine Arts Museum, you’ll discover divine culinary works of art within the realm of Tryst, designed to delight your gastronomic senses. Their creations set them apart from the other upscale eateries on Beach Drive. This award-winning dining destination brings eclectic dishes to the table and pours on the charm with a full bar featuring a dazzling menu of uniquely-designed signature cocktails. Tourists and locals alike can be sure to have a good time each time they enter the doors.

Missing the good ole' days and want to pretend you’re 21 again? Well, Downtown St. Pete has the perfect spot for that. On 1st Ave lies MacDinton’s and Yard of Ale, where college kids and millennials pack the bar like sardines on the weekends. These local staples are the area’s most popular bars for happy hours, drink specials, live entertainment, soccer/sporting events, and amazing nights out.

Our 5 Favorite Destinations in DTSP

The Salvador Dali Museum in DTSP houses more than 2,000 works of art and is officially the largest collection of Dali’s works outside of Europe. The museum itself is a work of art with exhibits like the beautifully curated Avant-garden that lies on the waterfront by 5th Avenue Southeast, Bay Shore Drive, and Dan Wheldon Way. In the 20,000 square feet of gallery space, Dali’s works of art include numerous oils, watercolors, sketches, sculptures, and other objects. This was a special addition to DTSP in 2011 and to this day it remains a frequent destination and staple of the area.

It’s not a dive bar, it’s a drive bar! The Pedal Pub is an 8 person tandem bike tour around Downtown St. Pete that just want to provide a fun, safe, eco-friendly way for groups of adults to get some light exercise and fresh air while touring interesting parts of our city. You and your friends will power this big Dutch-style bike while pedaling, singing, DRINKING (BYOB) and just having an all around good time. Bring your own ice, beer or wine (no liquor or glass permitted) and let a friendly pilot guide you on a 2-hour tour through the city, making up to three stops at local breweries and bars along the way. Reserve a bike for you and your friends for some great laughs and a good time.

The Imagine Museum houses a collection of American art created by founding, leading, current and emerging artists working in the field of studio glass. Tickets cost $10-$15 and it’s worth the price because you can get a full tour of the two-story museum. Right now the museum is home to more than 50,000 pieces of American Studio Glass and represents over 55 artists. Each of these artists is integral to the development of this medium as an art form. Take the tour and learn to appreciate a whole new art form!

In the EDGE District of Downtown St. Pete there are beautiful, vibrant and colorful murals covering most of the blank facades.  If you’re looking for great backgrounds for your next Instagram shot, head to the EDGE District in DTSP where the picture-perfect locations are vast. Check out this beautiful video tour of the murals in Downtown St. Pete.

If you’re looking for live music in DTSP, there’s no better place to go than Jannus Live. The atmosphere is unmatched, with an old oak tree in the middle of their courtyard and bars that line the border of their venue this is the ultimate outdoor concert location in Downtown St. Pete. If you don’t believe me ask Katy Perry or 50 Cent, two top 100 artists of their time, who once performed at Jannus Live. They have an all-star lineup of artists who have once taken center stage including Kid Rock, Stick Figure, Big Gigantic, San Holo, Kevin Gates, and Janelle Monae, just to name a few from this past year. In the upcoming months they have more up and coming artists, throwback bands and hot DJ’s invading the courtyard.

For more on Downtown St. Pete, return to 727area.com, your free and local guide to Pinellas County!