If you want to experience the beach and the mountains at the same time, you’d normally have to travel to the West Coast. But in early May you can get to experience one of the best beaches in America and breathtaking mountainside views at the same time right here in St. Petersburg. The Don CeSar presents Mountainfilm On Tour 2018 visits St. Pete Beach as part of their 2018 World Tour, and the Don CeSar hotel will be hosting the event May 4th and 5th.

Over the course of the festival, three two-hour film collections will be shown. “Life on Earth”, an environmental film series will be presented on Friday, May 4th. On May 5th an adventure series titled “Bring a Map” will be screened in the morning, and the entire event will culminate with a “Best of the Fest” series show that evening. A presenter from Mountainfilm will help enhance the experience through discussions of the films, the filmmakers, and their process. St. Petersburg is the only Florida date so far announced, and the city’s thriving arts community make it a perfect stop on the tour.

The Mountainfilm mission is to use the power of film, art, and ideas to inspire audiences to create a better world. The goal of the festival is to showcase nonfiction stories about mountain environments, cultures, climbing, and adventure. They also address the effects of political issues and social justice. Each year the worldwide tour educates millions of people on the power and fragility of nature captured in all its grandeur on film. The festival inspires engagement with and protection of the world in which we live. 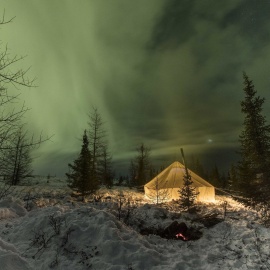 A scene from the Mountainfilm Festival.

“Mountainfilm is the single most-inspiring event I attend each year.  A chance to see films that would be lost.  A chance to find out what’s really happening in the world and see people who are living their dreams.” Ace Kvale, adventure photographer as quoted on the Mountainfilm website.

Tickets for the Mountainfilm Festival are $65 for adults and $50 for students and are available through Eventbrite. Room packages at the Don CeSar are available on the hotel’s website.

Make it a luxurious weekend by taking advantage of special packages offered at the legendary Don CeSar starting at $484.00 per night that includes tickets to the event. You can relax in the sun, pampering yourself at the spa and enjoying all the amenities of "The Don" while experiencing the breathtaking beauty of the Mountainfilm festival.

For more events in Pinellas neighborhoods, including the best places to eat in St. Pete Beach and the coolest bars to quench your thirst, go to 727area. Register for updates sent to your mobile phone and best of all. . . it’s free!

All photos courtesy of the Mountainfilm Festival.

Things To Do in St. Pete and Clearwater This Weekend | September 30th - October 2nd

Leave No Trace of Trash at Caddy's Community Cleanup

Best New Year's Eve Events for Dancing the Year Away in St. Petersburg and Clearwater